With the rapid, ever-changing improvement in digital capture it’s sometimes hard to keep up with the latest technology. Well, thanks to the RED and other digital cinema cameras that rapid pace has slowed a bit, ushering in an “age” that is sure to be the standard for sometime to come.

Even cell phones are capturing HD video now, rivaling the quality of some the consumer camcorders available. Enter the iPhone 4s: the first phone of it’s kind to offer an HD image at 1920×1080.

A unique workflow arose out of this idea. Capturing each shot leapfrog-style proved painstaking (Both films were shot in about 20hrs!). The iPhone was shot with the Owle Bubo & EnCinema SLR Lens adapter to allow the use of manual Nikon lenses, which produces the depth of field for the iPhone. And the post was no cakewalk either because obviously shooting a movie twice also doubles the amount of work involved in post: Double the edit, sound, color correction, and VFX. Nevertheless, it was a success. 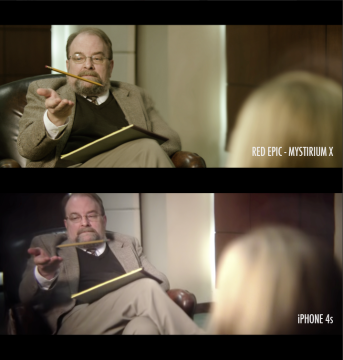 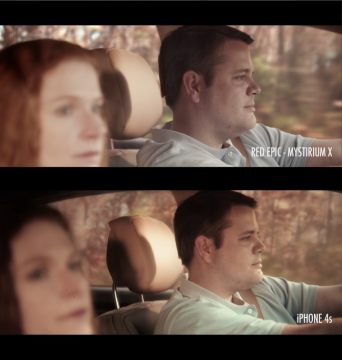 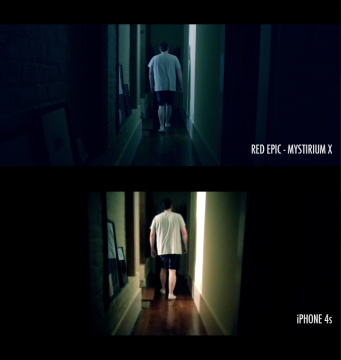 We had a few questions on the project for Director Eric Haviv to shed some light on this impressive undertaking.

What is the film about?

The film is about a young girl dealing with the sudden death of her mother.

How did the idea come to film with two cameras?

Any challenges during production?

There were tons of challenges we faced with the iPhone 4s. The iPhone honestly looked great when there were mass amounts of light present, but in low light conditions is where it really lacked. We were using the same lighting setups for both the RED Epic an iPhone 4s. The iPhone needed much more light, which we didn’t have and the end result definitely suffered because of that.

Were you surprised with the results?

I was a little let down with the iPhones results. Being the first time using the camera, a lot of the problems were unforeseeable. If we had to shoot on the iPhone again the results would definitely be far better. It still is amazing at the quality of video that can be achieved from a phone that costs a few hundred dollars.

What’s the biggest difference between the two cameras?

I can call my mom from the iPhone! The Epic is not this advanced yet. Maybe sometime in the near future they will develop this technology.

Written by D. Ross Kellett, Grief tells the story of a girl who loses her mother in a car crash. And finds an interesting way to help her grieving father. With a cinematic tone and cool VFX, the work contains excellent performances by Cathryne Minotto, Ryan Felton, Jade Nicolette, and Whit Davies. The film was also made possible with the help and generosity of H&A Jewelry.